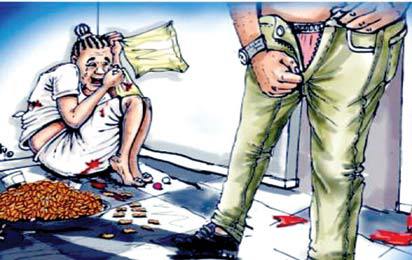 Officials of the  Adamawa State Command of the Nigerian Security and Civil Defence Corps have arrested a teacher, Nathan Yusuf for raping and impregnating a 12-year-old schoolgirl.

The state commandant of the NSCDC, Abdullahi Nuruddeen, said the suspect would be charged to court

“On September 2, around 2:30p.m., we arrested a rape suspect, Nathan Yusuf, 37, who is a teacher at Gurel Primary School in Namtari Yola South, suspected to have raped his pupil who is below 14 years of age.

“He confessed to giving her codeine syrup before raping her.” , he explained.
Bashir Tahir, a member of a non-governmental organisation, Hope Centre, which cares for rape victims in the state, said the group was providing support for the girl.

According to Tahir, “she has received all the needed support and the medical tests required. So far, she is free from all sexually transmitted diseases. But she will start receiving antenatal care next week at the Hope Centre.”

Tahir added that over 160 rape cases had been brought to the organisation, adding that 10 of them have been taken to court.

An uncle of the victim, Sulaiman Namtari, said the action of the teacher came to the community as a rude shock, because the man was hitherto highly respected in the community.