FG is planning to implicate us- Shi’ites 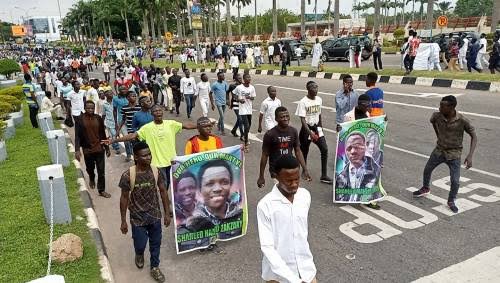 This, the group said is being done to finger  the sect as the mastermind of the killings.

Popularly known as  Shi’ites,  the group also  said  it  had information that the police  “will employ extra judicial approach to assault, arrest or kill whoever participates in the religious event”.

The allegation was contained in a statement issued by a member of the Academic Forum of the IMN, Abdullahi Musa on Monday

He  called on  religious leaders, civil society organisations,  the international community and others to monitor the  procession in order to expose those that are so desperate to cause violence for a pittance.

Ashura procession is an annual religious ritual carried out by  Shia (Shi’ites)  Muslims  all over the world.

In another statement on Monday  by the President  of the Media Forum of the group, Ibrahim Musa, Shi’ites  alleged that the FG “is planning to kill innocent security personnel, journalists and some members of the public and  put the blame on members of the Islamic Movement just as they did in Abuja in July”.

The statement added, “We therefore call on security personnel, journalists and members of the public to be particularly extra vigilant. The  public, media and the international community should hold the government responsible for the false flag operation should violence break  out during our usual Ashurah commemoration  on  Tuesday.”

Following   the July 22 clash between police  and  Shi’ites in Abuja which led to the death of DCP Umar Usman, a corps member, Precious Owolabi, and about 11 IMN  members,  the  FG proscribed the sect.

The Inspector-General of Police, Mohammed Adamu, blamed  Shi’ites,  who were protesting  against the detention  of their leader, Ibraheem El-Zakzaky, for the incident and subsequently ordered the arrest of their leaders and members across the country.

The IG in a signal to all state Commissioners of Police dated August 30, also directed them to dismantle the structures of the group.