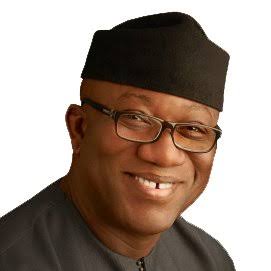 Ekiti State governor, Dr Kayode Fayemi has directed the state Commissioner of Police to fish out the policemen responsible for the killing of two students of the Federal University, Oye Ekiti during a protest last Tuesday.

Kayode Fayemi made public the directive in a state-wide broadcast on radio and television stations in the state.

The Governor also said that he has advised the police authorities to explore the use of non-lethal rubber bullets in managing public protests in the future.

Kayode Fayemi appealed for calm and called on the people not to exploit the unfortunate death of two promising young boys to disrupt the peace prevalent in the state.

According to him, his administration will be responsible for the hospital bills of those injured during the violent protest.

The governor said he had directed the CP to “urgently commence an investigation into the circumstances that led to the unfortunate shooting incident with a view to identifying possible culprits within and outside the Force.”

What started as a peaceful protest by FUOYE students turned violent and ended in tragedy.

Fayemi said though he could not comment much on the incident in view of ongoing investigations, he had no constraints expressing his sad feeling.

He said, “The right of citizens to protest on any issue relating to governmental actions or inaction is a fundamental component of our good governance agenda. We could not, therefore, under any circumstances have directed that deadly force be used on any of our citizens freely expressing their right to protest.”

Also, the Transition Monitoring Group on Sunday demanded the prosecution of police officers responsible for the killing