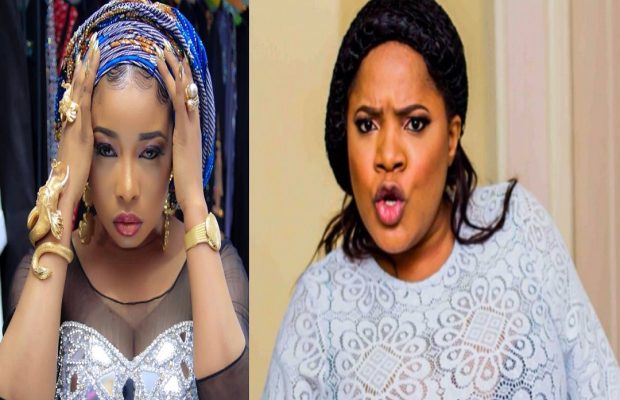 The Rift between two Nigerian female actresses, Lizzy Anjorin and Toyin Abraham has deepened with Abraham asking her lawyers to officially write Anjorin over the matter.

This followed an allegation by  Lizzy Anjorin against Toyin Abraham, of having a blog which posted a negative story on her.

Abraham posted the notification letter from a law firm; Legal House Solicitors, addressed to Ms Anjorin and sent to her office at Ikota Shopping Complex, Ikoyi, stating that they are representing Toyin Abraham formerly known as Toyin Aimahku, and will be addressing the case.

The heading of the letter is: “Cease and Desist Notice-Defamatory Statement Concerning Toyin Abraham.”

The actress stated that the issue would henceforth be addressed by her lawyers, saying, “Rather than wrestle with a pig, it might be ideal to let the pig know that it belongs in the pen. No longer speaking on this, my management team and attorneys are taking this up.”

Over the weekend, Toyin Abraham said that it is shocking that some upstarts masquerading as Nollywood actors keep dragging her name into unnecessary drama whenever they are trolled online.

” I’ve had my own share of online trolling but not for once did I drag the names of any actor or celebrities into the fray even when we don’t have cordial relationships.

“Today, an actress directly mentioned my name as the owner or informant of an Instagram blog, and libeled my person and reputation by implying I planted or published some negative news about her. Why she mentioned my name, I can’t say. What she’s trying to achieve, I can’t fathom. Long ago, I bade bye bye to unnecessary drama and petty online/offline squabbles and so I won’t descend to her gutter level.

“Anyways, I have instructed my lawyers to take up this matter and she will be hearing from them by Monday.  It’s time to put a stop to online bullying and bad behaviour in line with the rule of law.”, she added