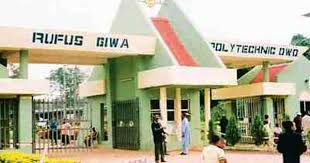 The alleged misappropriating of a sum of N68 million naira is causing ripples at the Ondo state owned polytechnic.

Lecturers at the Rufus Giwa Polytechnic, Owo has therefore called the sack of the Acting Rector and the chairman of the governing council of the institution.

The lecturers are insisting that the management must give account of how N68 million naira was misappropriated.

They accused   the governing council chairman of the institution, Banji Alabi and the Acting Rector, Gani Ogundahunsi of allegedly using different dubious and illegal means to misappropriate over N68million.

The lecturers on the aegis of Academic Staff Union of Polytechnics, alleged that  the governing council chairman and the acting rector  misappropriated N68 million meant  to purchase “tokunbo” cars and  money allocated for payment of arrears of accumulated workers’ salary.

At a news conference in Akure, the Chairman of ASUP RUGIPO Branch, Comrade Oluwadare Ijawoye
expressed concern over the deplorable condition of the school especially highly level of alleged corruption.

They therefore asked the state government to remove those involved in the scandal.

Ijawoye said, “Those involved in the scandal must be sacked forthwith. We are calling on Ondo state Governor, Rotimi Akeredolu to sack both the Acting Rector and the chairman of the governing council

He said all courses offered at the institution would soon be de-accredited by the National Board for Technical Education (NBTE) due to alleged monumental corruption rocking the polytechnic.
The ASUP Chairman called on Governor Oluwarotimi Akeredolu to immediately remove the Chairman of the Council over alleged maladministration while the Acting Rector and the Acting Registrar should be stopped from participating in the interview to shortlist new substantive Rector and Registrar due to age scandal.
The union also urged government to investigate the real age of the acting rector, Mr. Gani Ogundahunsi who is well above 65 years and can not become a substantive Rector again.