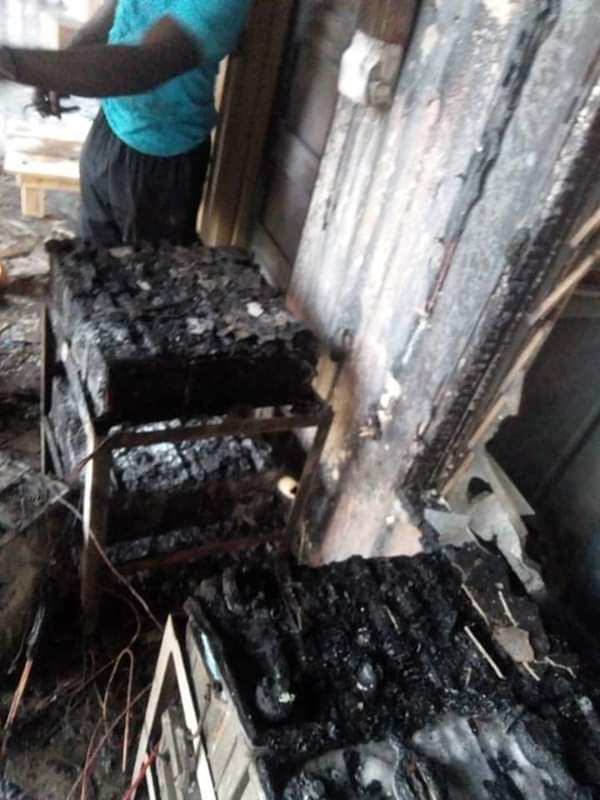 Office of the Catholic Bishop of Awka Diocese, Most Reverend Paulinus Ezeokafor was gutted by fire on Saturday night

It was gathered that  there was an electric spark when power was restored in the area which led to the fire outbreak.

What seems to be an electric discharge, later turned out to become  an inferno that razed down the two office blocks of the Catholic Bishop.

Eye Witness account revealed that  the electric spark was first discovered at around 6:00pm Saturday evening, which leaves  no sign of greater danger.

But to their  surprise,  what was perceived as a spark, hours  later turned out to become  an inferno, which destroyed most of the Bishop’s property in his guests office and a portion of his  locked up office.

Efforts to put out the fire by the church workers and some Reverend Fathers reduced the wreckage before the arrival of the fire service men from the Government Lodge Amawbia.

Also, our quest  to speak with the Catholic Bishop of Awka Diocese , Most Reverend Paulinus Ezeokafor was put on hold as the clergyman, who was not disturbed by the fire incident,  was reported to be going on a  pastoral visit, Sunday morning to a Catholic parish in Ugbeni community , Awka North LGA of Anambra state, before he will be able to speak to journalists.

No doubt that most valuables in the Bishop’s office were  spared of fire wreckage, surprised to state that the section of the Bishop’s seat where his Bible and belonging are, were exempted from the inferno wreckage.

The one-storey building where the Bishop office is at the top, only had the fire incident in two offices, leaving out other offices and the bungalow offices spared of the fire outbreak.