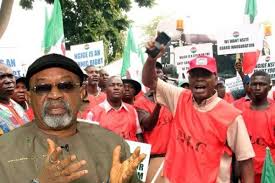 The Trade Union Congress side of the Joint National Public Service Negotiating Council has urged the Federal government to backdate the payment of the new minimum wage.

Recall that both federal government and organized labour reached an agreement on the the new minimum wage last Friday.

The agreement was reached 182 days after President Muhamudu Buhari had signed the bill.

The acting Chairman of the union, Anchaver Simon, and the Secretary, Alade Lawal, in a statement issued on Monday,

urged the government to keep to its promise of carrying out a general review of wages of public servants in the country.

TUC advised said the implementation of new minimum should start from the date it was signed by the President so as not to trigger another avoidable round of agitation by public service employees and their trade unions.

The statement read, “We are also glad that the government has taken note of the need for a general salary review in the public service.  We are looking forward to this review and we hope that the Federal Government will keep to its promise which was made during the negotiation of consequential adjustments”