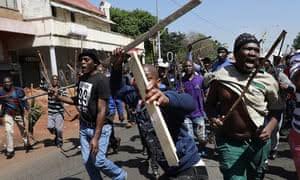 He  however, said no death was recorded during the incident.

The attack came barely few weeks after the state visit of President Muhammadu Buhari to South Africa where  he discussed the issue of xenophobic attacks with South Africa President.

His visit to South Africa was sequel to series of xenophobic attacks on Nigerians and other foreign nationals in South Africa.

Olubajo added that foreign-owned businesses, especially by Nigerians, were burnt down during the attack.

He said the crisis started at the early hours of yesterday when taxi drivers and some community members went about attacking foreign-owned businesses and foreigners, particularly Nigerians.

He added that the attackers moved to the interior of Witbank in the morning around Extension 10 where four Nigerians were injured.

“There is fresh attack in Mpumalanga, one of the provinces, an hour drive from Pretoria.

He said, The crisis started at the early hours of today. The taxi drivers and some community members went about attacking foreign-owned businesses and foreigners, in particular, Nigerians,” .

Olubajo added that the South African police could not stop the attack on time, even as he said normalcy has returned to the area.

Efforts made  to reach the Consul-General of Nigeria in Johannesburg, Godwin Adama, were not successful.

With additional information from the SUN Newspaper