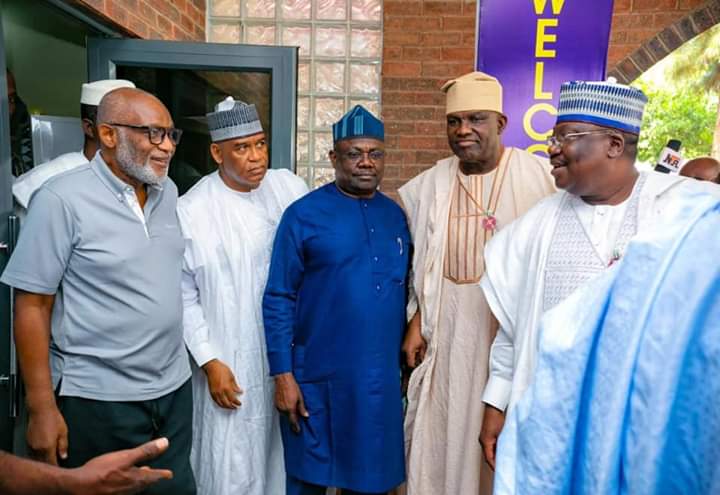 Governor Rotimi Akeredolu of Ondo state says politicians should set aside their political differences and think of how to move the country forward.

Akeredolu spoke when he received the Senate President, Ahmad Lawan and other principal officers of the Senate at the Government House, Alagbaka, Akure.

The Senate President, alongside Senator Ajayi Borrofice, Senator Ayo Akinyelure, Senator Opeyemi Bamidele and other senators are in the state to visit one of their own, Senator Nicholas Tofowomo, who was involved in a road accident recently.

Akeredolu noted that politicians need to put their political differences aside and think of things that will unite the country.

He said, “Your decision to see the senate as one is wonderful. Even within the party, we argue, there will be different opinions. The nation is the most important thing .

“We have a President that’s so respected all over the world we all respect him, we must work with him. I thank you for this decision of the spirit of oneness.”

Akeredolu thanked the Senate President for deeming it fit to come by himself and visit Senator Tofowomo.

According to the Governor, the decision of the Senate President to leave the seat of power in Abuja to visit Tofowomo has demonstrated his good leadership quality.

He said:” The senate President, let me thank you for your consideration and decision to stop by. Sir, that you, as the President of the Senate, left Abuja to be here to see one of your own, Senator Nicholas Tofowomo has demostrated your very good leadership quality. You could have sent any of your member, but that you led this wonderful team to pay him a visit, we thank you sir.

Earlier, the Senate President informed the Governor that he was in the state with other Principal officers to visit one of the members who was involved in an accident.

He said:”We also felt we should pay you this visit to thank you for giving us this kind of warm treatment since we arrived at the airport. We are going to Ondo to visit one of our colleagues who was involved in an accident . We want to go and pray with him and take the message of the senate that we are with him at all time.

“In the senate today, we all work together. It’s a conscious decision of the senate that all of us work together to give the required support to the Federal Government to perform Well in the country. We all want to see the security improve and we want to see an economy that works for everyone and all of us are in this.”