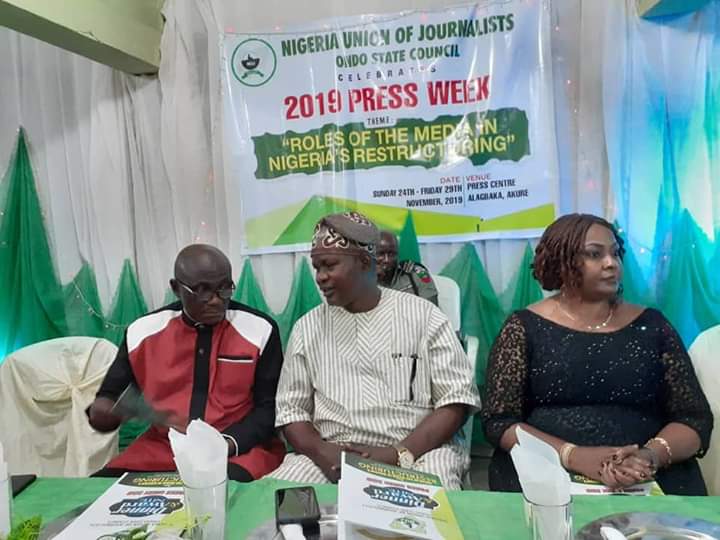 The Ondo state Chairman of the All Progressives Congress (APC), Engr Ade Adetimehin  said Governor Rotimi Akeredolu  will be reelected in the forthcoming 2020 governorship election in the state because of his outstanding performance in every sector.

He stated this at NUJ Press Centre, Akure on Friday during a Dinner & Award Nite ceremony of the 2019 Press Week celebration organised by the Ondo state Council of the Nigeria Union of Journalists (NUJ).

According to him,  Akeredolu’s government in the areas of road construction, renovation of schools’ classrooms, regular payment of workers’ entitlements among others placed the ruling party in good stead to win any election in the state.

Other Award Recipients: an Industrialist, Chief Oluremi Alex Ajipe (Award of Excellence in Corporate Services and Industrialization); a former NULGE Deputy President, Barr Wole Ademoyegun (Distinguished Public Administrator of the year); the Deputy Majority Leader of Ondo state House of Assembly, Hon Oladiji Olamide a.k.a Landmark (Distinguished Grassroots Politicians of the Year) as well as the Vice Chancellor of University of Medical Sciences, Ondo, Prof Friday Okonofua (Distinguished Administrator & Educationist of the Year).
 Adetimehin expressed optimism that with satisfactory performance of Akeredolu’s administration, the party would not face difficulties in retaining Ondo state and would continue to rule at the federal level in years to come.

“To frank with you, Aketi and APC administration is doing well, talk of roads (construction), school buildings (renovation), payment of salary arrears, good healthcare delivery, I can continue like that, how our administration has impacted on the people positively.

In an address, the Special Guest of the Occasion, Engr Ife Oyedele who was represented by his wife, Mrs Omobolanle Oyedele, felicitated with NUJ members on the occasion of their 2019 Press Week and urged them to continue to stand for the truth and objectivity in discharging their daily duties.

Oyedele who is also the Executive Director of the Niger-Delta Power Holding Development Company, described the media as the conscience of the society, adding that he would continue to support what would improve journalism profession.

The State NUJ Chairman, Adetona Aderoboye described the Union’s Awards as the most credible which were based strictly on the track records of the Recipients.

Aderoboye however, called on those honoured to redouble their efforts at impacting more on the society and in their various field endeavours.

Responding on behalf of the Award Recipients, Hon Kekemeke and Princess Odu who expressed appreciation to the NUJ for counting them worthy of the honours, pledging to do more for humanity.