No plan to impose VC on Ondo Varsity. 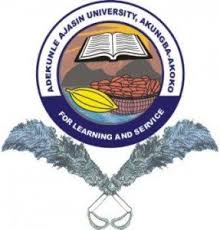 The Ondo state government has faulted a story that it is planing to impose a  particular candidate as the next Vice Chancellor of the  Adekunle Ajasin University, Akungba Akoko.

The state government described the statement as misleading.

According to a statement issued by the Commissioner for Information and Orientation, Donald Ojogo, the current government’s belief in due process in the administration of the State’s Public Service remains unwavering.

He added that the government is not interfering in the selection of a new Vice Chancellor for the university.

The story reads in part, “The attention of the Ondo State Government has been drawn to the narrations of seeming government’s interference and undue influence in respect of the above subject matter.

” In particular, a misleading tale is being insinuated that the State Government is poised to impose a particular candidate as the next Vice Chancellor of the University. These narrations draw inspirations from a letter which emanated from Government stopping the selection process.

“Unnecessary as these stories seem, the public deserves to know that the letter from the Office of the Chief of Staff to Mr. Governor was meant to forestall an avoidable crisis of confidence amongst members of the University’s Governing Council. This came to the fore as Government received a protest letter from some members in respect of the selection process.

“Owing to the importance Government attaches to University administration, it was decided that Mr. Governor who is the Visitor, meets with members of the Governing Council to straighten all contentious issues. The meeting holds next week.

” Therefore, insinuations as a result of this development  are incorrect and should not be taken seriously. For the avoidance of doubt”