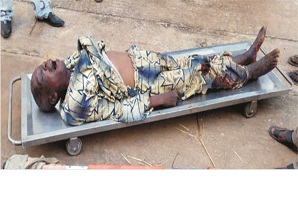 The Police in Ondo state are  on the trail of the killers of the 75-year-old night guard, Jimoh Teloye at the premises of the popular Osele market in Ikare Akoko

Teloye popularly called Yerepe in the area was found dead  on Monday morning.

Residents, particularly traders at the popular Lagos Line section of the  market, behind the Ikare Central Mosque,  met the corpse of  the night guard in front of some lock-up shops in the market.

The Commander of Ikare Area Police Command, ACP Razak Rauf, said investigation was on to fish out the perpetrators of the crime.

He warned criminals to steer clear of the area , saying the place is no go area for criminals.

He added, “The police is ready to fish out criminals. Those who killed the night guard will not be allowed to go scot free.
Teloye was employed as night guard by some shop owners in Ikare.

His hands were tied behind him while a  cloth was forced into his mouth  to prevent him from shouting.

He was  strangled to death in the process and his assailants later broke into some shops after using sledge hammer to break the walls of the shops and carted away many goods.

His corpse has since been deposited at the  morgue of the  State Specialist Hospital, Ikare-Akoko.