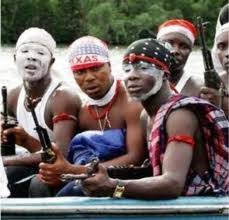 Some youths suspected to be sea pirates in Gbagira village in the llaje Local Government Area of Ondo State have reportedly killed  four naval ratings.

The naval men were killed while trying to rescue three foreigners from being abducted in the area.

The News Track gathered that the suspected killers also went away with the four military rifles and seven magazines belonging to the killed naval ratings.

One of the sea pirates was however apprehended in a suburb of Awoye community in the Ilaje Local Government Area.

A reliable source said  the suspected kidnappers, who eventually abducted the foreigners, came from Balyesa State.

The Commanding Commanding Officer, Forward Operating Base in Igbokoda, Navy Commodore Danjuma Ndanusa, said he had directed community leaders to produce the stolen weapons of the deceased or face the wrath of law.

Ndanusa said one of the pirates that was apprehended had confessed that the missing rifles were in the community.

He said, “We intimated them (community leaders)  on what is at stake. It is like sleeping on a time bomb.”