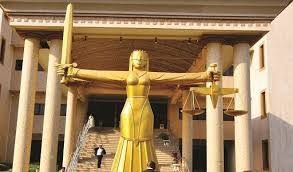 Supreme Court is set to give judgements in the Sokoto And Kano  state Governorship election appeals from the fall out of the election conducted on march 9 , 2019.

A seven-man panel of justices  led by the Chief Justice of Nigeria, Justice Tanko Muhammad, fixed the date for judgement after hearing the appeal by the Peoples Democratic Party’s candidate in the keenly contested poll, Kabir Abba-Yusuf, challenging the victory of the All Progressives Congress and its candidate, Abdullahi Ganduje And an appeal filed by the candidate of the All Progressives Congress (APC) Ahmed Aliyu who is challenging the victory of Aminu Tambuwal as governor of sokoto state.

Both the Sokoto  and kano State Governorship Election Petition Tribunal and the Court of Appeal had earlier dismissed the petitioners case  and they went on appeal,asking the apex court to upturn the lower court s decision.

In attendance at the Supreme court this Monday is Bauchi state Governor, Bala Mohammed and other political key players.