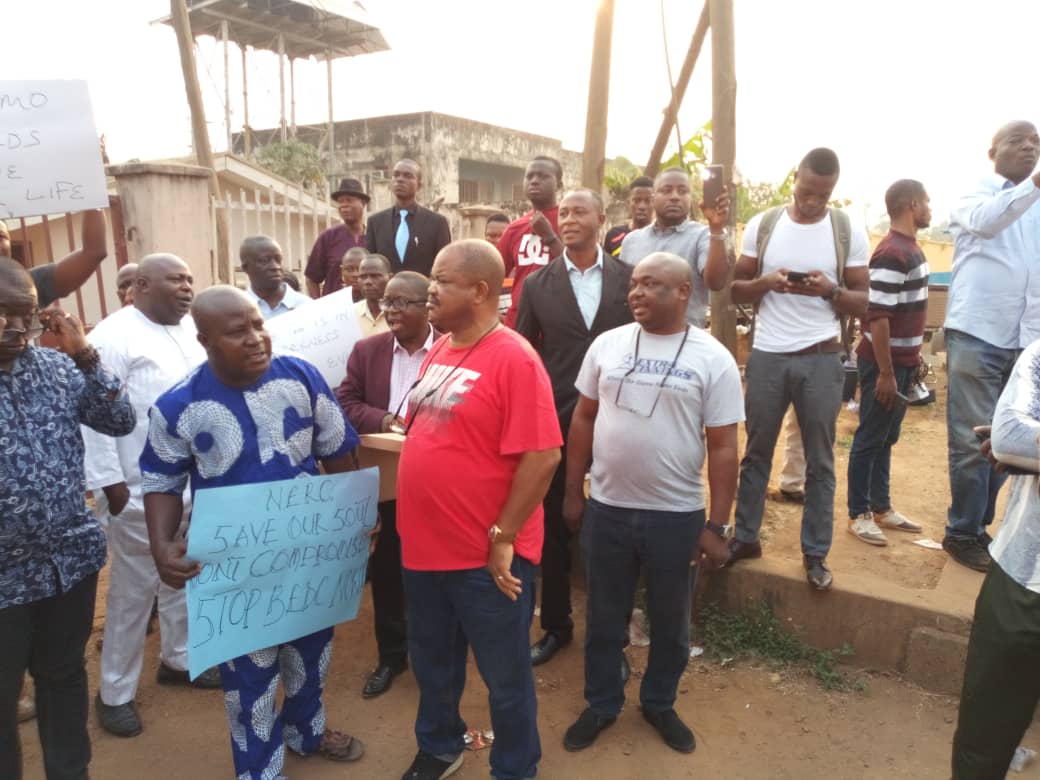 Some Residents of Akure from Ajayi Elekumo area have protested the extortion and outrageous estimated bills by the Benin Electricity Distribution Company(BEDC).

Residents of the area abandoned their jobs on Monday morning to storm BEDC state office to vent their anger.

They were armed with placards with different inscriptions which simply captured their plights.

We are tired of outrageous estimated bills, We are not animals, we are tired of total blackout, are some of the inscriptions on their placards

One of the landlords in the area, Mr Fredrick Ojo said estimated billing should be stopped because they had not had light in the last eight months

Ojo said the landlords in the area had bought transformer, but the officials of the BEDC refused to energise it to relieve the already overloaded one in the area.

“We demand an end to ridiculous and outrageous estimated bills. All cases of billing without light and humongous bills should be reviewed.

“Everybody should be metered and no impediment should be placed in the way of acquisition,” he said.

Another Landlord, Barr. Oluseye Olujimi said houses that had already possessed metres should not be forced to buy new ones since the ones they bought were still working fine.

“No one should be forced to buy cables from BEDC. 16mm cannot be and is not better than 35mm or more. If anyone needs to change their cables, they should not be forced to buy from a particular vendor.

“Our rights to freedom of choice and  self determination cannot be abridged,” he said.

Also speaking with newsmen, another Landlord, Leye Igbagbo said the residents would not accept the inability of the BEDC to energise the transformer they bought with their hard earned money.
Igbagbo siad BEDC should provide all necessary things that would make people to enjoy the services they were paying for.

The Business Manager of the BEDC, Mr Andrew Okojie, said most of the complains of the landlord were already being attended to.

Okojie said fourteen concrete poles had been moved to the estate and were already being used to replace the wooden ones.
He also informed the protesters that contract had been awarded to ensure that the transformer the community bought was fixed with immediate effect, thereby calling for calm