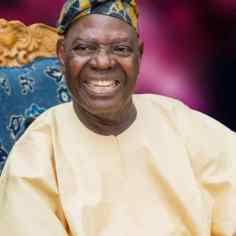 A group, Ondo State Sunshine Mandate Group has passed a vote of confidence on Chief Bisi Akande on hisappointment as the Chairman of All Progressives Congress National Reconciliation Committee.

The group at a news conference said it would not allow the name of the former Osun state governor to be dragged into the mud.

A group under the All Progressives Congress in Ondo state known as the  Unity Forum at its meeting in Akure on Tuesday passed a vote of no confidence on Chief Akande and alleged him to be on the payroll of Governor Oluwarotimi Akeredolu .

In a communiqué issued at the end of its meeting. the group  urged President Muhammudu Buhari  to appoint a neutral person  as the Chairman of APC National Reconciliation Committee.

But Sunshine mandate group  led by Ambassador Olusola Iji, in a statement issued on Wednesday faulted the position of the Unity forum, describing it as embarrassing.

The group said it will not fold its arms and allowed some group of politicians to dent the image of Akande.

The group said the attack on the former governor of Osun state is wicked and reckless.

The statement reads, “For us at the Sunshine mandate eminently led by Ambassador Olusola lji, we particularly the character consider the position taken by the Unity  Forum, assassinating conjectures contained in their Communique made public yesterday as being completeiy wrong and unwarranted. We totally disagree with the shocking insinuations expressed on Baba  Adebisi  Akande’s person in the offensive, rude and crude Communique.

“While not outrightly condemning the germaine points advanced by the Unity Forum’s Communique, the Sunshine Mandate would however condemn in strong terms the vote of no-confidence recklessly passed on Chief Adebisi Akande by the signed Communiqué.

“We strongly believe that His Excellency, Ali Olanusi -past Chairman of a political party,former Deputy Governor of Ondo State in the recent past and highly respected Elder Statesman ought to know better than embarrassingly travelling along with others on the unpopular road chosen as revealed by the released Communique.

” The Sunshine Mandate considers it curious that a vote of no confidence couid be recklessly passed on a distinguished and nationally respected leader of Chief Bisi Akande’s caliber who got appointed by the Presidency to settle the disorganized APC in our home state when our own known leaders failed to so do’.