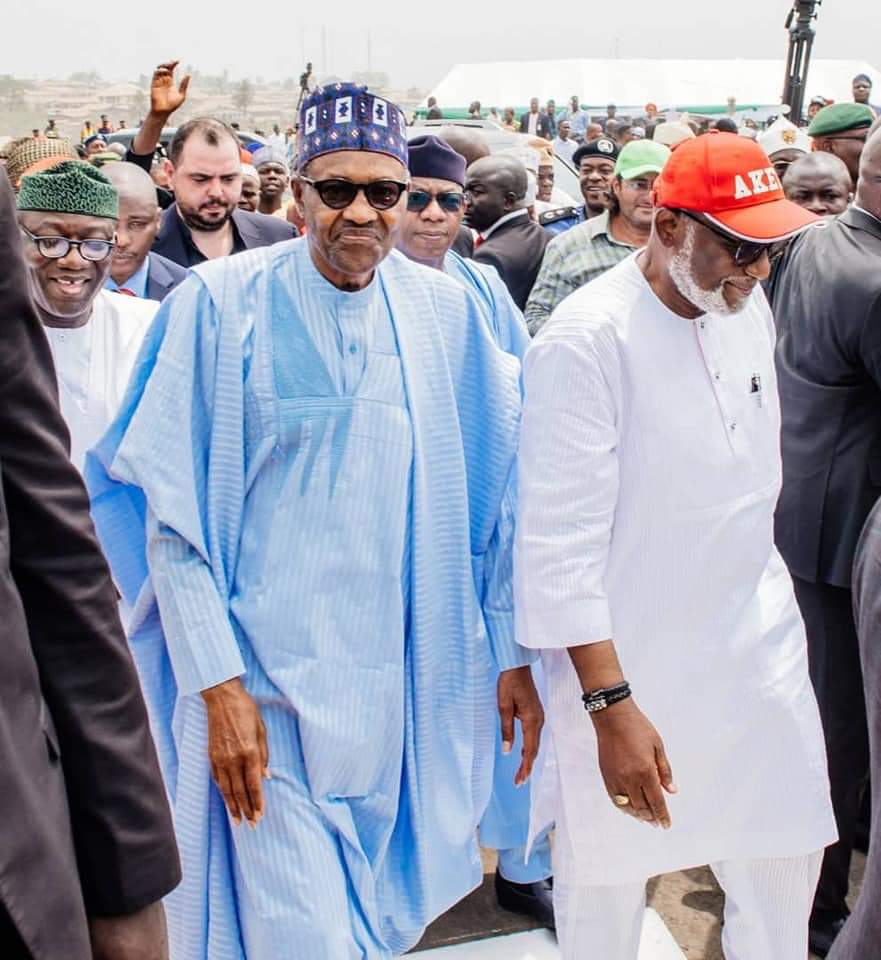 By Arogbonlo Israel and Goodness Eze.

President Muhammadu Buhari on Tuesday commissioned the Industrial Hub and 50b Flyover Interchange in Ore to mark the Third Anniversary of Governor Rotimi Akeredolu in Ondo.

Speaking at the occasion, Buhari commended Akeredolu for his landmark strides in the state.

“I still recall the ancient brief from Governor Oluwarotimi Akeredolu on this project and its conception, back then it was an idea, today, due to hard work, dedication and commitment to delivering inclusive growth, that idea has now become a reality,” Buhari said.

He further added that Ondo state will receive unending support from his administration, in Buhari’s words, “Ondo state in particular, in aspiring investment destination, I want to assure you our continuous support both in the Federal and State level.”Buhari thanking the rulers and community people said the project created jobs for young men and women.

“May I also thank the traditional rulers and the host community for their tolerance, understanding, support and effort to ensure this investment expands and succeeds.”

“I am confident through this project, we utilized locally available raw materials to create jobs for young men and women in this locality, increase knowledge and capacity.”

Buhari was in the company of Governors of Ekiti, Edo, Ogun, and some ministers of the federation to commission the flyover which is expected to ease traffic along the Benin/Lagos expressway.

While appreciating Mr President for his courtesy visit, Gov Akeredolu said: “On behalf of Ondo state, we say a very big thank you to President Muhammadu Buhari for honouring our visitation. I’ll be glad to reveal with great excitement the level of inquisitiveness of Mr President as he toured 3 of the 6 facilities at Ondo-Linyi Industrial Hub asking questions about each one.”

Some residents expressed their goodwill to the State Governor for his huge achievements within the span of 3 years, saying Akeredolu is a great developer.

One of them who identified himself as Mr. Ayodele said: “We thank God for the good governance we are enjoying in Ondo. It’s indeed a commendable achievement that we would not forget in hurry. God bless Mr. Governor for his good heart towards the people.”

Another resident who spoke under the condition of anonymity prayed for the improvement and progress of the state under the administration of Gov Akeredolu while urging the latter to continue the good works .

The commissioning is part the activities marking the third anniversary of the Governor Akeredolu’s administration.