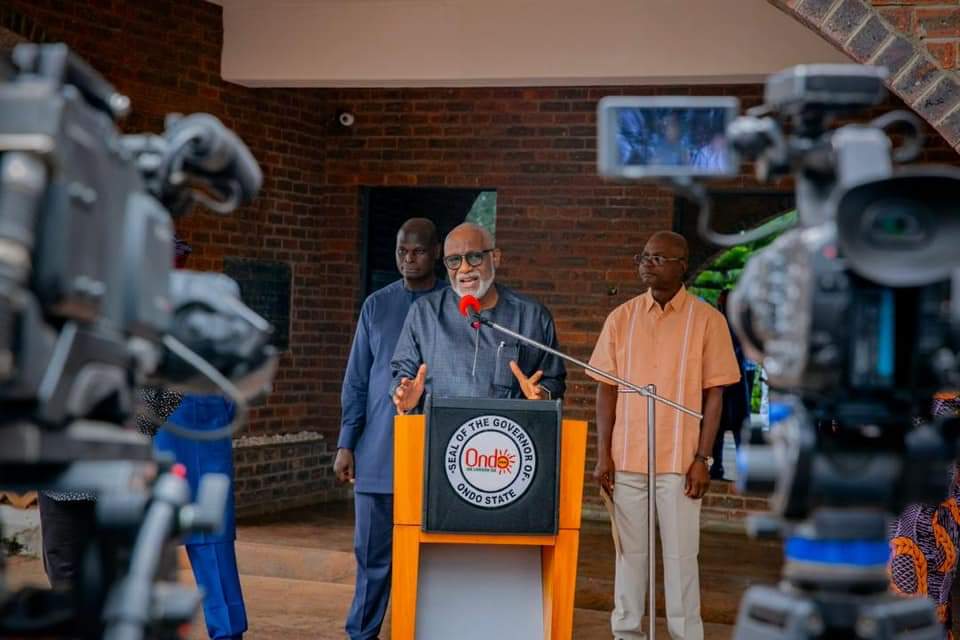 Ondo State Governor, Oluwarotimi Akeredolu, has ruled out the possibility of  taking the COVID-19 patient in the state to Lagos State for treatment.

Governor Akeredolu said the state has the capacity to treat the patient who is a military officer that just returned from India.

Akeredolu who spoke in Akure at a press conference said contact tracing for the patient has begun.

He added that a number of persons, who had physical contact with the patient before the virus are being traced, while others are currently being examined for possible symptoms.

“On this issue of COVID-19, the government has set up a very robust structure to deal with this pandemic. So, the intermedia committee put up with the Commissioner for Health as Chairman has done a great deal of job particularly in respect of the test that has just turned to positive.

“If you trace the history of the officer who is now positive, you would know that he leaves us with little or no potential of expansion. This is because, on his return, the barrack put itself on self-isolation.

” This the Brigadier Commander confirmed to me because we spoke about it. The Health Commissioner and team also confirmed that the gentleman soldier kept himself on self-isolation after his arrival from India.

“The Governor said there should be no cause for panic among the residents over the reported COVID-19 incident, stressing that measures had been set in motion by the state and federal governments to contain the spread of the virus across the country.

“Our people have no reason to fear because the government has put measures in place to contain the further spread of this pandemic in the state. Also, the government has decided to help our students via the educational broadcasting programme powered by the Ministry of Education in conjunction with the State Broadcast Corporation.

“We have also set up special relief distribution committee as well as COVID-19 fund mobilisation and management. The committee for food distribution is made to be here in Akure to purchase and now share food through accepted areas like Local Governments by aggregating it, and sending it through the proper channel, which is the Local Governments. The distribution would be done through various Local Government Chairmen, Special Assistants, among other prominent members of the House.”

Mr. Akeredolu thanked the members of the press for their commendable work amid coronavirus pandemic in the State. He also appreciated the good people of Ondo for keeping good faith with the Government and following all the precautionary measures put in place to contain the further spread of the pandemic in the state.

On his part, the State Commissioner for Health, Dr Wahaab Adegbenro, said; “About two weeks ago, a military officer arrived from India on official assignment, and immediately, the military authority placed him on self-isolation” .

The Commissioner urged the residents to keep obeying all the preventive measures as instructed by the Nigeria Centre for Disease Control (NCDC) so as to avoid the spread of the pandemic in the state.