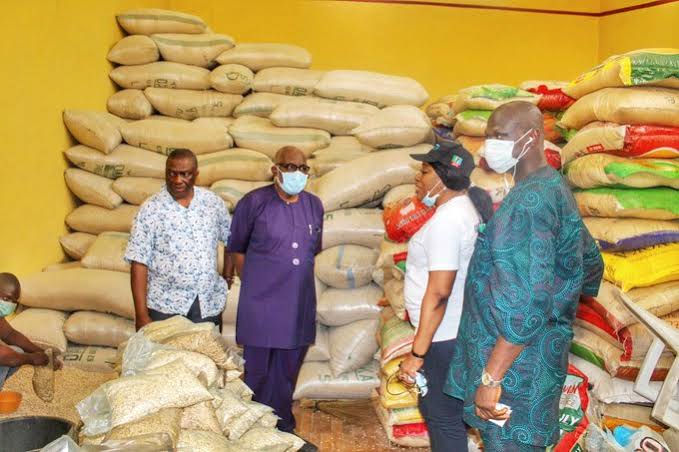 Ondo State Government has described the news making the rounds that it rejected the palliatives donated by the Federal Government through the Ministry of Humanitarian and Disaster Management as untrue.

Special Adviser  to Ondo state Governor on Public and Inter-Governmental Relations, Bunmi Ademosun made the clarification on Monday at a news conference in Akure .
She said the state government never contemplated returning the rice to the Federal Government.

She expressed  shock over the way the story was to have read in some newspaper Publications that the state rejected the rice.
The palliatives sent to Ondo were 1800 bags of rice and 700 gallons of vegetable oil as part of measures to cushion the effect of the COVID-19 lockdown in the country.

She said it was unfair to say that he joined hands with the Oyo State government to return the rice.

Describing the report as unfounded, embarrassing, shocking and false, he said there was no plan to return the rice and other food items sent to the state.

She said the committee has commenced the repackaging of the rice for onward distribution to the vulnerable in the state as the rice has been tested and confirmed to be edible.

According to her, “We have no plans to return the rice, and such report never emanated from the state government or any member of the palliative committee.

“The state government had commended the gestures of the Federal government towards cushioning the effect of the lock down across the country. It behoves on us to appreciate the gestures rather than condemning it.

“The items are in good shape, and good for consumption. The expiry date are boldly written on the rice, we cannot distribute what is harmful to our people.

“We don’t want to lose them, irrespective of their political leaning, we will not sacrifice the people we govern by giving them expired or products that are not good for human consumption.

Meanwhile the Ondo State Coordinator of YESSO, Bankole Olaoluwa, said they have provide the state with Social Register of poor and vulnerable by capturing over 20,000 heads of households, which would aid the distribution of the palliatives.