Amotekun arrests 42 cows over invasion, destruction of farmlands in Akure. 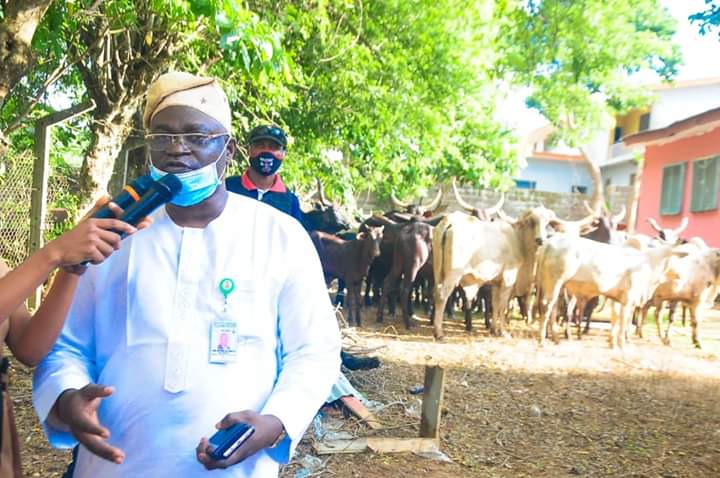 Briefing journalists after conducting them round the affected farmlands, the state Commander, Amotekun Corps, Chief Adetunji Adeleye, explained that the cows were arrested after series of 5 complaints by owners of the farmlands in the axis.

According to him, over eight separate farmlands with crops such as maize and cassava were completely destroyed by Fulani herdsmen who usually graze their cows around the affected area.

The Corps Commander noted that the herders who were heavily armed chased away the farm owners who later contacted the Amotekun Corps.
He added that on seeing the owners of the affected farmlands, the heavily armed herders attempted to kill them but the farmers ran for their dear lives.

Chief Adeleye also revealed that when the joint security network including Agro-Rangers of the NSCDC got to the scene, the herders again attempted to attack them but they were overpowered by the security operatives, leading to the arrest of the cows while the herders took to their heels.

He warned Fulani herdsmen in the state to desist from destroying another man’s property but rather rear their cows in confined areas to avoid wanton destruction of farmlands in any part of the state.

The Corps Commander, equally advised farmers not to result to self-help anytime they see cows destroying their crops but alert the Corps for necessary actions.

Chief Adeleye who decried the level of destruction to the farmlands said the owners of the cows would be made to pay for the crops destroyed and subsequently face prosecution.