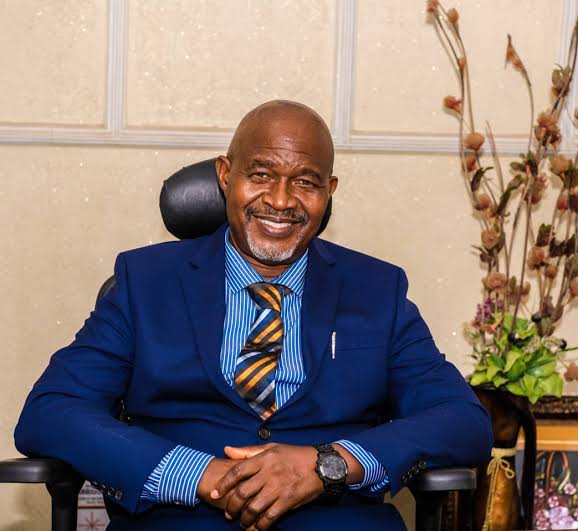 Governor Rotimi  Akeredolu and the All Progressives Congress in Ondo state have petitioned the State Commissioner of Police to investigate an allegation made by former Secretary to Government,  Ifedayo Abegunde that 2016 governorship election was rigged

Akeredolu and APC through their lawyer, Femi Emmanuel Emodamori, said the claim by Abegunde should be investigated.

The former SSG publicly declared, amongst other things, as reported in both the print and electronic media on/or about 6th July 2020, that: “Akeredolu didn’t win the election in 2016 but we made it possible for him to become governor.”.

In a petition dated 14th July, 2020 and obtained by SUNSHINETRUTH, Akeredolu and his party said emphatically that the much publicized allegation of manipulation of the 2016 Ondo State gubernatorial election by Abegunde is diametrically spurious, false, reckless, senseless, and criminal.

The statement reads, “From the facts made available to us by our clients, Hon. Sunday Ifedayo Abegunde (a.k.a Abena) was until recently, the Secretary to the Ondo State Government. He was appointed in that capacity by His Excellency, Arakunrin Oluwarotimi Odunayo Akeredolu SAN, the Governor of Ondo State, who was inaugurated on February 24, 2020 after winning the gubernatorial election in Ondo State conducted by the Independent National Electoral Commission (INEC).

“According to the official result of the gubernatorial election published by INEC, A.P.C and its candidate, Arakunrin Oluwarotimi Odunayo Akeredolu, SAN polled 224, 842 votes, while the People’s Democratic Party (P.D.P) and its candidate in the election, Eyitayo Jegede, SAN polled 150, 380 votes. The Alliance for Democracy (A.D) and its candidate in the election, Chief Olusola Oke, SAN came third, with total votes of 126,889.  The victory margin of our clients was therefore clear and wide. The election results were never disputed by any of the candidates before the Ondo State Election Petition Tribunal.

“Our clients were shocked when, upon his resignation from office as the Secretary to the Government of Ondo State, Hon. Sunday Ifedayo Abegunde publicly declared, amongst other things, as reported in both the print and electronic media on/or about 6th July 2020, ) the Punch Online Report, that: “Akeredolu didn’t win the election in 2016 but we made it possible for him to become governor.

“Our clients emphatically state that the much publicized allegation of manipulation of the 2016 Ondo State gubernatorial election by Hon. Sunday Ifedayo Abegunde is diametrically spurious, false, reckless, senseless, and criminal.

“It was made simply to scandalize our clients, particularly the Governor, three and half years after the undisputed election, and instructively, after Sunday Ifedayo Abegunde parted ways with the current government of Ondo State.

“Clearly therefore, the false, scandalous and criminal allegation was actuated by malice.

“For Hon. Sunday Ifedayo Abegunde (a.k.a Abena) to have publicly declared that he “helped” the Governor to win the 2016 gubernatorial election connotes, or is supposed in law to connote the following:

“That our clients did not genuinely merit the victory ascribed to them by INEC in the said 2016 governorship election.That our clients won the said election through underhanded tactics aided and abetted by Hon. Sunday Ifedayo Abegunde and his faceless cohorts.

“That our clients are fraudulent with their claim that they won the said 2016 governorship election.That Arakunrin Oluwarotimi Akeredolu, SAN is a person to be investigated for being without integrity, good character and unworthy to occupy the sacred and exalted position of Governor of Ondo State.

“That but for the “help” and or assistance of Hon. Sunday Ifedayo Abegunde, Oluwarotimi Akeredolu, SAN would not have been declared by INEC as the duly elected Governor of Ondo State in the 2016 governorship election, which allegation is reckless, wicked, criminal, and has portrayed and put the Governor and his Party (the A.P.C) in Ondo State in particular and Nigeria in general, in public ridicule, odium or scorn.

“You would agree with us that electoral integrity is a very serious and sensitive issue in Nigeria. For any person to fraudulently procure the return of any other person to an elective office, whether directly or indirectly, is a criminal offence punishable with twelve (12) months imprisonment, by virtue of section 124(1) (a) of the Electoral Act, 2010 (as amended)”.
Section 27 of the Criminal Code, Cap.37, Vol.1, Laws of Ondo State of Nigeria, 2006, clearly states that: “Every person is presumed to be of sound mind, and to have been of sound mind at any time which comes in question, until the contrary is proved.” Hon. Sunday Ifedayo Abegunde is therefore presumed to be compos mentis (sane) as at the time of making such public declaration. He must therefore be justified or condemned by his own words, which amount to a self-confession of criminality.

*Consequently, we have the instruction of our clients to call on your office to set all the necessary machineries under your control as the Commissioner of Police in motion, to unravel the truth or falsehood in the allegation(s) of Hon. Sunday Ifedayo Abegunde, by conducting a thorough investigation into the allegation in this petition”.