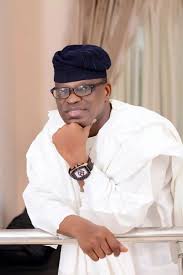 Some politicians are been tipped to be Jegede’s running mate.

Among them is one of the governorship aspirants, Banji Okunomo.

All the politicians tipped for the  deputy governorship position are. from Ondo South senatorial district.

Ondo South was tipped to produce the running mate because it is considered as the  stronghold of the PDP.

Jegede has been under intense pressure to pick Deputy Governor as his running mate.