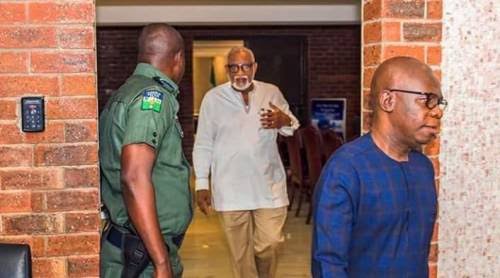 The meeting was coincidental as Governor Oluwarotimi Akeredolu and the Deputy Leader, Robert Ajayi Borofice were also at the Lodge for a Peace meeting with governor Abubakar Sanni Bello.

Mild drama, according to thenewstrack.com ensued as the embattled deputy governor never knew that Akeredolu and Boroffice were billed for the meeting.

It was gathered Mr.Ajayi could not come out to greet the duo.

As at press time, the purpose of Ajayi’s meeting with the Niger governor is still unknown

Ajayi recently dumped the APC for the PDP where he lost his bid yo clinch the governorship ticket of the opposition party.

This could however be connected with alleged plans by the deputy governor to pursue his governorship ambition in another political party ahead of election.