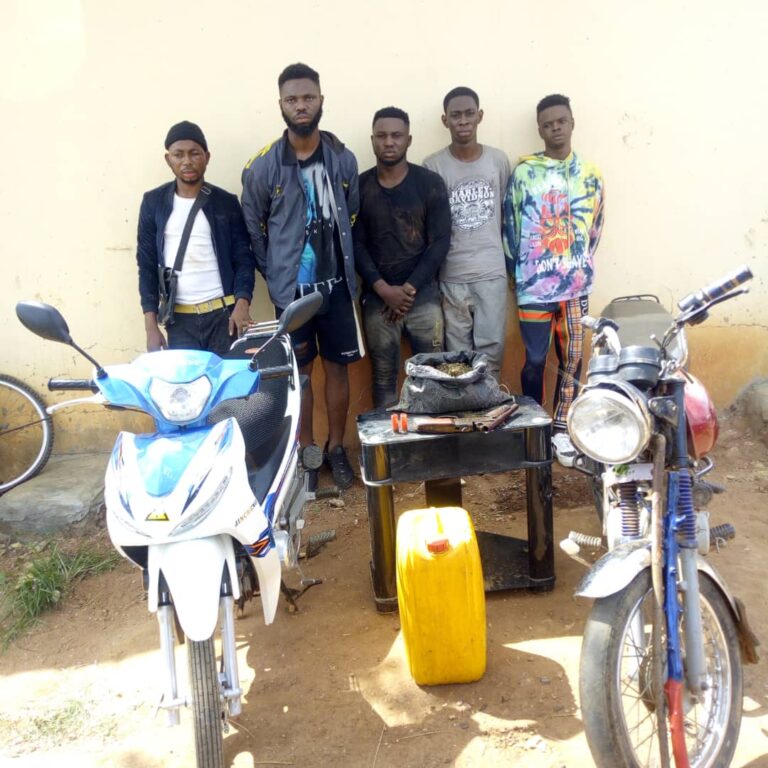 The police in Ekiti State have apprehended five students of the Ekiti State University for  alleged  involvement in cultism.
Spokesperson of Ekiti  State Police Public Relations Officer ASP Sunday Abutu confirmed that the students were arrested during an initiation ceremony in a bush behind the campus.
The suspects arrested are: Adeyeye Adeyemi ‘m'(29yrs), Adeyemi Tobi ‘m'(25yrs), Moyosore Onajobi ‘m'(22yrs), Dickson Godwin ‘m'(23yrs) and Olowosaye Martins ‘m'(21yrs).
” On 25th April, 2021 information was received by the Police Rapid Response Squad(RRS), Ekiti State Command, that some members of the BLACK AXE(AIYE) secret confraternity were holding an initiation rite inside a bush behind Ekiti State University(EKSU) Campus, Iworoko-Ekiti.
“Upon the receipt of the information, a team of the RRS Operatives in synergy with the Police Personnel attached to Iworoko Divisional Police Headquarters swung into action and stormed the bush where the suspected cultists shot sporadically on sighting the Police.”
Abutu added that five suspects were arrested while others took to their heels.
Items recovered from the scene are one cut to small size locally made pis hitol, two expended cartridges, one gallon containing liquid drug, weeds suspected to be Indian Hemp and two motorcycles.
The Ekiti State Commissioner of Police has ordered a thorough investigation of the arrested suspects and has equally tasked the Operatives to ensure the apprehension of the fleeing suspects.