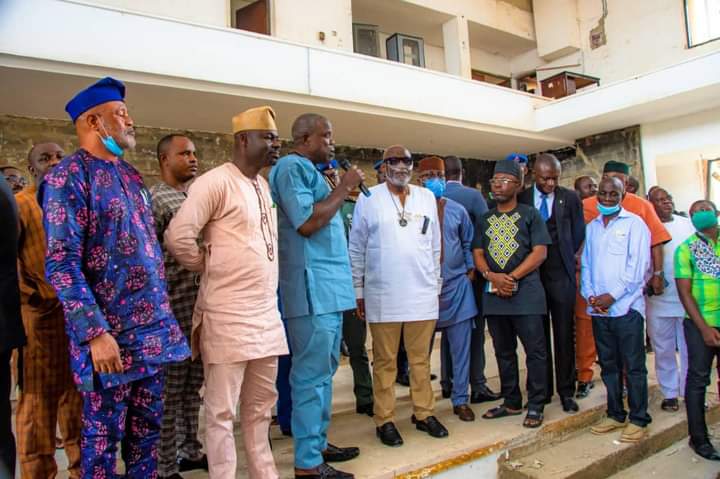 Ondo State Governor, Arakunrin Oluwarotimi Akeredolu, SAN, on Wednesday paid an unscheduled visit to the Ondo State House of Assembly complex to inspect the ongoing renovation work at the hallowed chamber.
The Assembly complex which was built several years ago is being renovated by the Governor Akeredolu-led administration to provide a befitting working environment for the lawmakers.
The Governor, who was received by the Speaker, Rt. Hon. Bamidele Oleyelogun; deputy Speaker, Rt. Hon. Samuel Aderoboye, and other members of the Assembly, described the renovation as a core issue.
He expressed satisfaction with the level of work done, adding that visible changes at the Assembly were obvious.
He said: “We have had to come because I want to have an update on the renovation work going on here.
“Those who are on strike, I’m not against it. It is not a state issue. It is a national issue. But it is not right to lock the gate against the workers. The renovation of this Assembly is a core issue. It has been built several years back and no one had touched it until now.
“We are doing total renovation. There has been a total change. About June or July, this place will be ready. We will have a hallowed chamber that is befitting. After that, we will then go outside the building.“
The Speaker, Rt Hon. Oleyelogun, appreciated the efforts of Governor Akeredolu, adding that the Governor has again shown that he is Mr. talk-and-do.