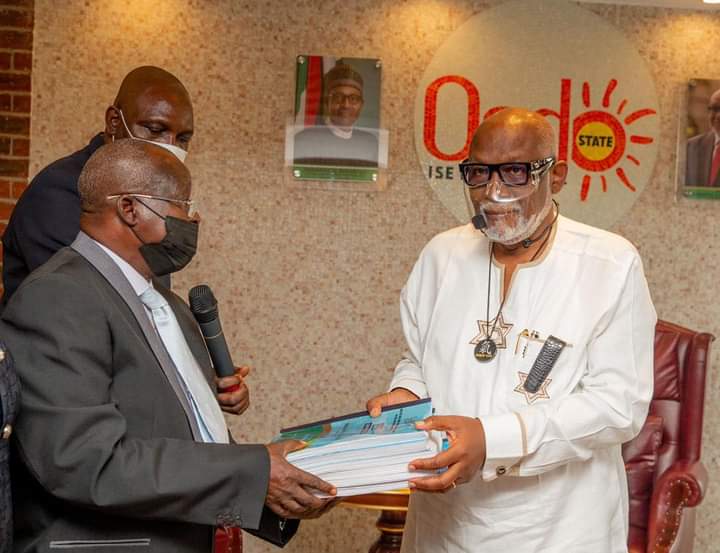 The Ondo State Judicial Panel of Inquiry on Police Brutality and Other Related Matters has recommended payment of N755,730,897.83 as claimed by the petitioners.

It said it received 77 petitions from public and private persons including organisations.

Besides payment of the N755m, the panel also recommended publication of apologies in national dailies particularly where the reputation of victims had been tarnished.

Chairman of the panel, Justice Adesola Sidiq (Rtd) who led other members to submit report of the committee to Governor Oluwarotimi Akeredolu, noted that the ‘disheartening aspect of our assignment bordered on human rights violation which dates as far back as 2003 and unfortunately remained unresolved until this Panel was set up.’.

Justice Sidiq said the panel heard 14 criminal and 63 civil matters in the petitions.

He called for a review of Section 84 of the Sheriffs and Civil Process Act, (2004) to enable judgement creditors enjoy the fruit of their litigations.

According to him, “Apart from the monetary recommendations which totaled at the sum of N755,730,897. 88 (Seven Hundred and Fifty-Plve Millon, seven Hundred and Thirty Thousand, Elght Hundred and inety-Seven Naira Blghty-Eight Kobo), the Panel equally recommended publication of apologies in national dailies particularly where the reputation of victims had been tarnished.

“Another issue which became thorny was on the cases which had been decided by Courts of competent jurisdiction, but were brought before the Panel for lack of payment of judgement debts. Mr. Governor Sir, the Panel, after careful consideration of its limitations in line with extant Supreme Court judgments on the powers of Panels of Inquiry to entertain res-judicata cases, suggests that it is high time a review is carried out on Section 84 of the Sheriffs and Civil Process Act, (2004) to enable judgement creditors enjoy the fruit of their litigations.”

Governor Akeredolu who thanked the Committee for doing a thorough job said his administration would do justice to the report.

Akeredolu who lamented the worsening security situation in the country since the end of ENDSARS said those who used the protest to settle political scores like the burning of both secretariat of the APC and the PDP would bear their cost.

He said, “ENDSARS was a legitimate protest but it got to a point where hoodlums hijacked it. The destruction of properties was not done by ENDSARS protesters. ENDSARS was not about setting buildings ablaze like the Aketi Campaign office. Those are political matters. People wanting to settle scores.

“When we go through your report, we will see how you want us to spend N755m. We will look at it again. Where politicians set each other buildings ablaze, each persons will bear the cost. At Okitipupa, I told them the state government will not be coming. They are contributing money to carry out repairs at Okitipupa local council. In Owo, the people protected property. Those hoodlums who hijacked ENDSARS were ready to destroy anything.

“The recommendation of reviewing Section 84 of the Sheriffs and Civil Process Act, (2004) is a civil process. It is more of a federal legislation. We will get our federal lawmakers to kick start it.”

Governor Akeredolu who assured his administration would offer apologies where necessary immediately dissolved the Committee.