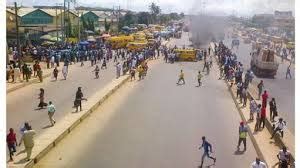 The OPC in a statement made available to news men by its Acting Coordinator, Nafiu Sarafa accused some government officials of fueling the crisis.

The statement added , “this moment, many members of the OPC, including our commandant, have gone into hiding to avert further bloody clash with the cultists who are now going round the town unchecked; banishing guns, cutlasses and other dangerous weapons to attack our members.

“In order not to take law into our hands and to abide by the principle of peaceful conduct of our revered leader and the Aare Onakakanfo of Yorubaland, Iba Gani Abiodun Adams, we have directed our lawyer to write a petition to the State Commissioner of Police, Mr. Salami to put the criminals under security watch and control.

“While awaiting the response and quick action of the police and other security agents to our petition, we implore our action Governor, Rotimi Akeredolu who is also a legal luminary and learned silk to do the needful by calling his aides, to order and set every mercenary in motion to curb the ugly situation currently disrupting the peace of his hometown, Owo”