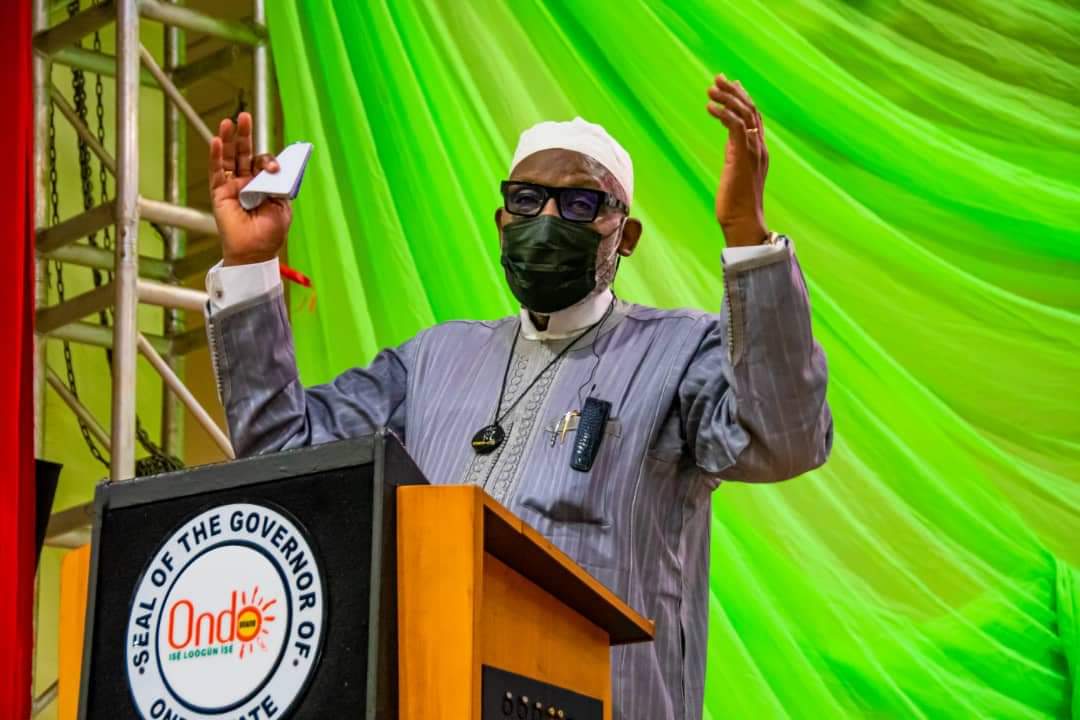 Governor Rotimi Akeredolu has assured, that his government is not planning to sack workers in the state despite the economic downturn.
The Governor spoke on Sunday at the breaking of “Ramadan (Iftar 2021) with Mr. Governor” held at the International Culture and Events Centre, (The Dome), Akure, the state capital.
He sought the understanding of workers in the state in the face of the harsh economic weather.
He said , “Our economy is bad at this time and we are also battling with insecurity. Some states like Kaduna have sacked their workers, some are no longer paying the 18,000 minimum wage but we are not going to do that”.
He said the first of its kind Government House Mosque built by his administration will be commissioned by June 4, 2021, as part of the projects to mark his 100 days in office.
The Governor said the mosque would be named after late Alhaji Khaleel Fawehinmi, former Chairman, Ondo State Muslim Welfare Board, who died last year to immortalise him.
The Mosque is the first of its kind in the history of the state as Arakunrin Akeredolu becomes the first Governor to build a mosque inside the Government House.
The Governor who said he doesn’t discriminate, called on both the Muslims and Christians to co-exist peacefully, adding that both religions preach love and sacrifice.
He added that his administration will continue to prioritize merit irrespective of religion backgrounds.
Present at the event are the Deputy Governor, Mr Lucky Aiyedatiwa; the state APC Acting Chairman, Ade Adetimehin; the Speaker, Ondo State House of Assembly, Mr Bamidele Oleyelogun and other top government functionaries.
Muslim leaders at the event include the Chairman, League of Imams and Alfas, Ondo state, Sheik Ahmad Aladesawe; the Chief Imam of Akure, Alhaji Abdul-Hakeem Yayi Akorede; Alhaji Sheik Abdulrafiu Lagbaji among several others.
In his opening remarks, the Chairman, Ondo State Muslim Welfare Board, Alhaji Zikrullah Chandy, appreciated the Governor for his love and various kind gestures for the Muslim community in the state.
He equally applauded Governor Akeredolu for the building of a mosque at the Government House which is at completion stage, adding that the development has further shown the special recognition accorded Muslims in the state by his administration.