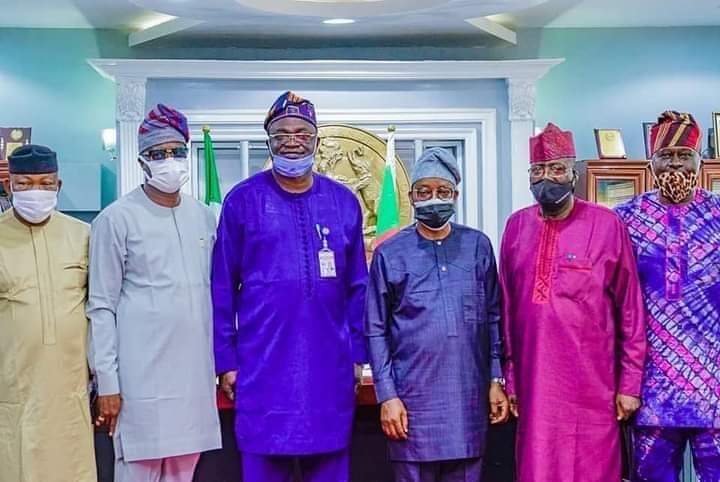 The Commander, Ondo State Security  Network Agency codename  Amotekun Corps, Chief  Adetunji Adeleye  has been elected as the Chairman of the Council of Amotekun Commanders in Southwest Region.
Adeleye was elected at the meeting of southwest Corps Commanders held in Osogbo during the weekend.
Exemplary leadership displayed by the Governor of Ondo State,  Arakunrin Oluwarotimi Akeredolu (SAN) Chairman of the Southwest Governors’ Forum and his sterling qualites for the core to function were part of the attributes that chief Adeleye his position.
Adeleye said  his new appointment will bring synergy of all Amotekun Commands making Ondo State as the head in the south west state.
He also stated that Ondo State Amotekun core as the headquarter will bring  all members of Amotekun core to see themselves as one to collectively deal with the criminals in the region.
He ephasised that history is repeating itself and advised that “we must do what our predecessors did if an end must be put to these needless agitations and ethnic conflicts.
“The import of this historical background is to enable us chart a new course and put our differences aside in order to reach our full potentials and ensure the protection of lives and property in our domains.
“Our  heritage winning wars no matter the form or cause, must be aided by shared interests and intelligence if we must bequeath such to the next generation.
“Our hinterland and highways must be free from attacks both in the day and at night. Cities and towns must be free from criminal activities and peace while our borders must be jointly protected.
The Chairman of the Council of Amotekun Commanders in Southwest region stated that they all reached an agreement that they will be able to access the present security situation in the area and apply advance solution to each of the state Command.
“We have noted that Amotekun corps is against criminals not against any ecthinic groups. When we drive these criminals the end up going from state to state.
” Let’s don’t for get these criminals emanate in the forest of the region with extensive forest.
The Warlord  said his new position as the Chairman of the Council of Amotekun Commanders is from God Himself as he give thanks for the opportunity to serve.
He added that he will ensure the style of operation would be sycronised that will be compared favorable with modern security out fits organization across the globe interns of best modern practice.
” I see us all reducing criminality to the barrest  minimum within the zone. I will ensure there is good synergy between the existing security conversational Agencies and Amotekun core in the existing zones because if you look at the law setting up the core , it’s very clare we are expected to compliment the efforts of the mother security agencies which am going to ensure it’s done across the region.
” I believe with this there will be no inter agency clash as operation will be smooth when the share informations and  Amotekun provide the grassroot information to archived the samehe same goal.
The Chairman Council of Amotekun Commanders lead the war lords in a courtesy visit to the Osun state Governor Mr Governor Adegboyega Oyetola for the unflinching support given to Amotekun Corps in Osun State and appreciated the Governor.
Oyetola  charged the security outfit commanders on the need for collaboration to combat crimes in each state of the region and to curb the immigration of criminals into any state of the South West.
He promised he will ensure they conclude recruiting and commence training of the first official batch within two weeks.
The Commanders at the visit to the governor are; Ondo State Amotekun corp commander, Chief Adetunji Adeleye;
Osun State Amotekun corp commander, Brig.Gen.Basheer Adewinbi (rtd); Ogun State Amotekun corp Commander, CP David Akinremi (rtd); Osun State Amotekun Board,Gen.Ademola Aderibigbe and Ekiti State Amotekun corp commander, Gen.Joseph Komolafe (rtd).