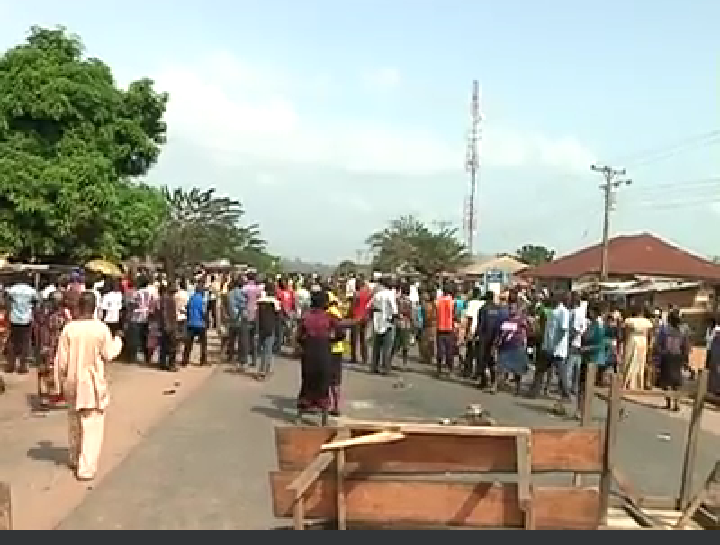 Some Youths in Itaogbolu, Akure North Local Government area of Ondo State are protesting the death of one of their own, Ayo Oloyede who died in a  motor accident on Saturday evening.

The deceased  is a police officer formerly attached to anticultism of the ondo state police command.before he was posted to the scorpion department of the command.
He died in the road mishap while  on transit.
It was gathered that  the deceased came to visit his mother at the village as he was returning to Akure, the state capital where he resides.
The vehicle, according to an eyewitness, somersaulted  three times between ltaogbolu and Odudu village, before the police college.
The driver of the vehicle survived the accident while the police officer, Ayo Oloyede died on the spot.
The incident forced many youths in the community to vent their anger as they believed the tragic incident was not natural .
They barricaded the major road that connects Ondo state with the neighbouring Ekiti State.
This has caused
traffic on the federal highway while motorists plying the road could not travel from ondo state to the neighbouring state.
The youths  in the town has chased the traditional ruler of the town, Oba Idowu Faborode, the Ogbolu of Itaogbolu out of his palace demanding his duties, while believing that he has failed in his function as a monarch to protect his subjects.
Police Public Relations officer in the State, Tee Leo Ikoro when contacted said he has not been briefed on the development.