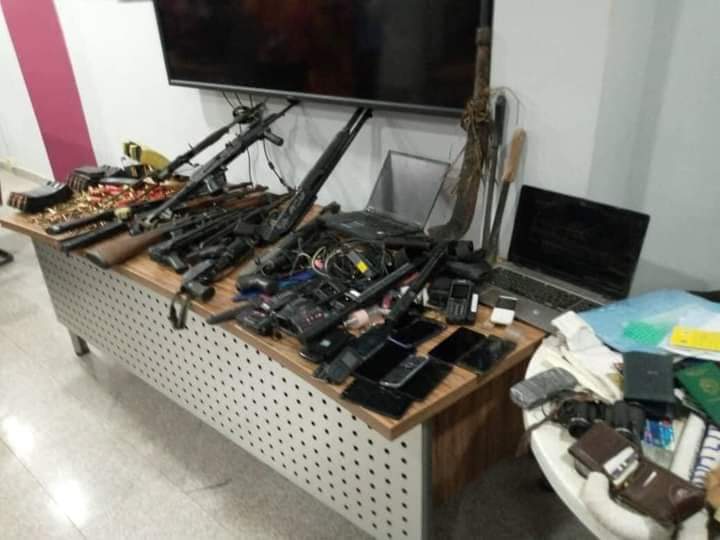 The Department of State Services (DSS) has asked  Yoruba Nation agitator, Chief Sunday Adeyemo popularly known as Sunday Igboho to surrender himself for investigation.
The security agency also  confirmed the raid of Igboho’s house  by a team of joint security operatives.
DSS spokesperson, Dr Peter Afunanya, disclosed this while briefing journalists on Thursday evening, saying  the raid was based on intelligence that Igboho was stockpiling arms to cause unrest.
He added that six boys at Igboho”s house engaged security operatives  in a gun battle.

Afunanya said two of Igboho’s men were killed while an operative sustained injuries.

He said Igboho escaped during the gun battle,warning that even if he is on the run, the law would catch up with him.
At the briefing, Ifunaya also displayed all the items recovered from the residence which include arms, traditional armour, charms, international passport among others.
Ifunaya said, “Sunday Igboho is advised to turn himself in to the nearest security agency.
“Those cheering and eulogising him may appeal to or advise him to do the needful. He should surrender himself to the appropriate authorities. He or anyone can never be above the law. Meanwhile, those arrested will be charged accordingly”.
Some of the items recovered from his, according to DSS spokesman are: Seven AK-47 assault rifles;
Three  Pump Action guns; Thirty  fully charged AK-47 magazines among others