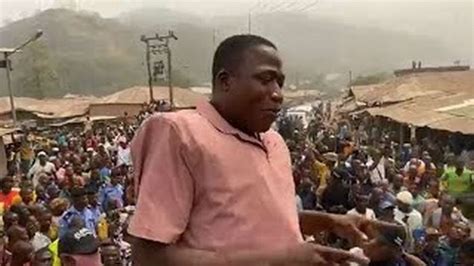 The Aareonakakanfo of Yorubaland, Gani Adams has condemned  Thursday’s midnight attack on the residence of Yoruba rights activist, Sunday Adeyemo, known as Sunday Igboho, in the Soka area of Ibadan, Oyo State.
G

Adams said eight persons were killed in the attack while the house and cars were riddled with bullets.

Some of the occupants of the house were said to have been whisked away by the invaders who were claimed to have dresses in military camouflage.

Adams in a statement by his Special Assistant on Media, Kehinde Aderemi, said the attack was a ploy to silence Igboho from expressing his views on the state of the nation.

He however charged the Federal Government to investigate the circumstances surrounding the ugly incident and also bring the perpetrators to book.

Adams said “The attack on Sunday Igboho’s house is most unfortunate. It is a reflection of the fact that our lives as Nigerians are of no value to the government. And the truth is that nobody is safe in this country.

“The recent attack was the second in six months. The first was in January when his Soka resident was razed by unknown arsonists. And up till date, nobody had been apprehended in respect of the ugly incident’