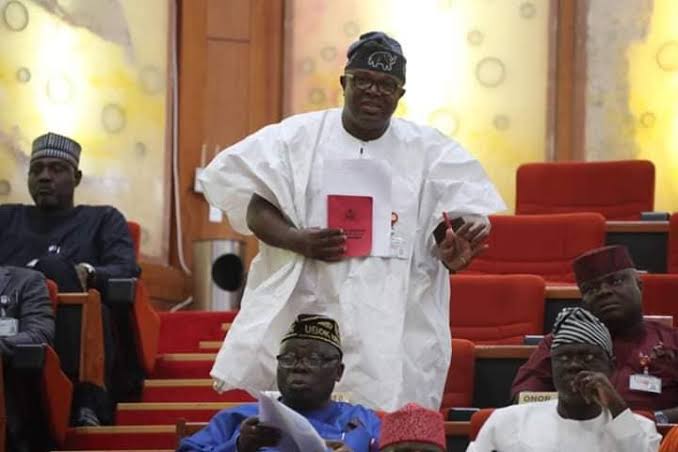 The Senator representing Ondo South in the National Assembly, Nicholas Tofowomo, has petitioned the Inspector-General of Police, Mr Usman Akali over alleged blackmail by a chieftain of the All Progressives Congress (APC) in Ondo State, Mr Akin Sowore.

Sowore had penultimate week, written a petition to the police to investigate, arrest and prosecute Senator Tofowomo over allegations of rituals dealings with some youths suspected to be PDP delegates in his senatorial in his desperation to secure a second term ticket.

But the Senator’s Media Aide, Akinrinlola Olumide, had since described the allegations as mischievous, untrue, and falsely concocted by detractors to dent the Senator’s image ahead of the 2023 general election because of his intimidating and distinguished achievements.

In response to the petition through an official letter dated September 6, 2021, and submitted at the office of the Inspector General of Police on Wednesday, with the Chairman Senate Committee on Police Affairs in copy, Senator Tofowomo asked the Police Chief to investigate the following:

(I) Investigate whether such meeting ever took place in my house on the said date.
(II) To investigate the names of the youth in the purported meeting of the said empowerment.

(iii) To investigate the veracity and authenticity of the allegation.

(IV)To Investigate and mandate the said Lawyer to provide video proof of these malicious allegations.

(V) Bring to book the culprit under the law to serve as a deterrent to others.

Read the full letter below:

In the story credited to him in which he informed the Inspector General of Police that I invited some youth for empowerment meeting and that I prepared some ritual concoction to manipulate them ahead of the forthcoming PDP delegate election and he equally sent the same to all media houses in Ondo State inclusive the New Media: Facebook, Instagram, and Whatsapp Groups.

I wish to state that the said Akin Sowore was one of those I appointed in my first year in office as Special Assistant on Legal Matter in which I paid him the sum of N75,000.00 (Seventy-Five Thousand Naira) every month. See Annexure-II.

Sometimes in July 2021, Akin Sowore came to me that he took a loan and that I should help him to liquidate the said loan but I told him I have no such capacity but with a promise that I will look into it.

Surreptitiously, like a tale in Arabian Night, Akin Sowore resulted in blackmailing me, saying that I am not ready to assist any youth in Ondo South Senatorial District. When this antic failed, he resulted in a campaign of calumny against me which equally failed.

There was a day that he assaulted me, and if not that my security details maintain their calm, it would have resulted in a state of anomie.

When this publication came out both on radio and social media in Ondo State I was nearly maimed, it took the intervention of God and the good people of my town who saved my life.

A situation where a man goes about on a quixotic voyage and breaks the law, rule and regulation which is put in place to ensure societal well being must be deprecated.

I am seeking your timely intervention on this situation and to use your good offices to intervene by:

1.​To investigate whether such meeting ever took place in my house on the said date.

2.​To investigate the names of the youth in the purported meeting of the said empowerment.

3.​To investigate the veracity and authenticity of the allegation.

4. To Investigate and mandate the said Lawyer to provide video proof of these malicious allegations.

5. Bring to book the culprit in accordance with the law to serve as a deterrent to others.

Accept the assurances of my highest regard