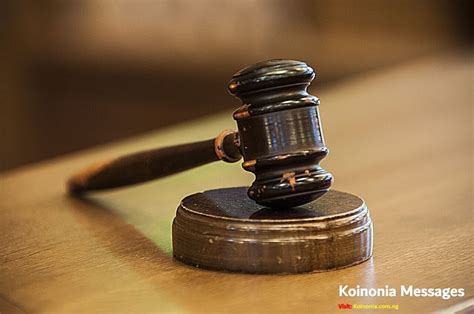 Two persons have been arraigned for duping the Redeemed Christian Church of God, Wealthy Place Parish, Gwarimpa, Abuja, to the tune of N10 million.
The two suspects  Mrs. Patricia Eni Hassan and Mr. Zachaeus B. Gana were arraigned by the  Independent Corrupt Practices and Other Related Offences Commission (ICPC).
The duo were arraigned before Justice Muawiyah Idris of High Court 36 sitting in Nyanya, Federal Capital Territory (FCT), Abuja, on a six-count charge, which bordered on fraud, dishonesty, falsification of documents and corruption.

Part of the charges as read in the court stated that sometime between 2014 – 2016, both accused conspired to obtain by false pretence the sum of N10 million to secure land for the church, which they failed to do.

ICPC’s  Spokesperson,  Azuka Ogugua, in a statement,  said the offence was contrary to Section 1 (a) and punishable under Section 1 (3) of the Advance Fee Fraud and Other Offences Act of 2006.
“They were also alleged to have forged an offer of “Statutory Right of Occupancy” purportedly issued by the Federal Capital Territory Administration, thereby committing an offence contrary to Section 366 and punishable under Section 364 of the Penal Code Laws of the Federal Capital Territory, Abuja,” Ogugua stated.

The defendants both pleaded not guilty to the charges, and their counsel made an oral application for bail, which was not opposed by the prosecution counsel.

The defendants were granted bail to the sum of N5 million.

In addition, they were to  each produce a surety, who shall enter a bail bond of  N5million with evidence of their ownership of landed property within the jurisdiction of the court.