Let each state be in charge of internal security- Akeredolu 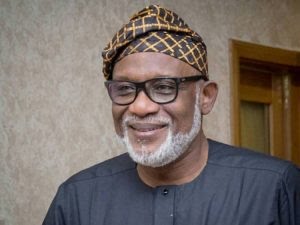 Governor Rotimi says  the unique diversity which should ordinarily be a source of strength is gradually becoming the country’s albatross.
Akeredolu in a statewide broadcast in commemoration of the 2021 Independence Day Celebration called for urgent restructuring of the country to reflect the diversity and address the various misunderstandings and high rate of criminality in the polity.

He said: “Our country is blessed abundantly. There is hardly any part of this vastly endowed space that should not be self-sustaining. This land should not be a place where hunger, poverty and a general sense of lack predominate.

“We must be bold enough to interrogate why these challenges appear perennial. We must not shy away from the reality of our diversity which should, ordinarily, be a source of strength but is gradually becoming an albatross.

“We must inquire for the reasons why those who regarded themselves as brothers and sisters no longer feel comfortable seeing or accommodating one another.

” We must be willing to confront whatever system which has reduced the once self-reliant sub-national entities to perpetual dependencies practically.

“The states of the Federal Republic of Nigeria appear independent nominally at present.  Serious attempts must be made to return our country to the path of progress trodden by the founding fathers.

“Conscious efforts must be made by both the political and communal leadership in all the parts of the country to reorientate the people to embrace the pristine values which held lofty promises for advancement.

“Consequently, I am of the firm view that this occasion affords us yet another opportunity to reflect deeply, on the current difficulties and proffer frank suggestions which will assist in addressing our fundamental challenges of nationhood.

“Our people must strive under a system which recognize their God-given talents and promotes unique initiatives. All federating units must be less dependent on the Federal Government for basic survival.”

Governor Akeredolu, who commended the Federal Government for the current victories recorded in the war against insurgents and terrorists in the Northern region, also acknowledged the great strides taken in abridging the infrastructural deficits in the country.

“We must, however, admonish on the immediate necessity to restructure the polity in a manner that will engender progress and amity. There is no other way to solve the current socio-economic problems facing the country.

“The security challenges bedeviling the country will become a thing of the past if proper devolution of powers is undertaken. The over centralization of the security architecture is a major impediment.

“Having a police command structure in a country of over 200 million is not sustainable. The attempts by some states to complement the efforts of the security agencies are at best tokenistic. Let each State be in charge of internal security in its locality.”