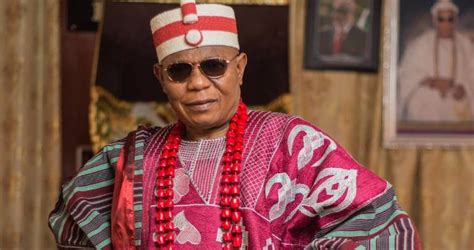 The Deji of Akure, Oba Aladelusi Aladetoyinbo has faulted the selection of Prince Olugbenga Ojo as the new Iralepo of Isikan.

The monarch described his selection as a mere  joke.

Recalled that Prince Ojo emerged as the Iralepo-elect after a selection exercise which ended on Thursday at Saint Thomas’s event centre, Isinkan.

Report says Prince Ojo was selected ahead of 4 other princes.

The Deji of Akure however pointed out that the reported selection of Prince Ojo was null and void as far as the kingdom was concerned.

Presenting the new iralepo to newsmen at his palace, Oba Aladetoyinbo said he had approved the appointment of Adeyeye Henry Gbenga on 4th of October, 2021.

Represented by senior high chief Segun Adedipe, the elemo of Akure Kingdom, the Deji said the new iralepo’s appointment was based on favourable consideration and the unanimous decision of Aruwolasi Iralepo family of Isikan in Akure.

He said “It is my pleasure to welcome you to this important media briefing on the presentation of High Chief Adeyeye Henry Gbenga as the new Iralepo of Isikan in Akure South Local Government.

He said “It is important to re-emphasize that the late Iralepo of Isikan was a Quarter Chief and an active member of the Deji in-council until his death following the approval of his inclusion alongside the Osolo of Isolo, High Chief Edward Adejoyegbe Adewole by the Deji of Akure on 8th June, 2020.

“It is pertinent to clarify that the new Iralepo of Isikan is being installed as a Quarter Chief and the Head of Isikan Community in Akure and not a Traditional Ruler.

“You might have heard of the rumor flying around on the purported nomination of an Iralepo other than the one appointed by His Imperial Majesty who is empowered both traditionally and legally to make such appointment.

“The Palace wishes to urge you and the general public to disregard the move by some individuals who wants to make it look as if there is crisis.

“It is a mere joke taken too far as it has no place in the eyes of the law. It can only exist within the figment of the imagination of those behind such moves”.