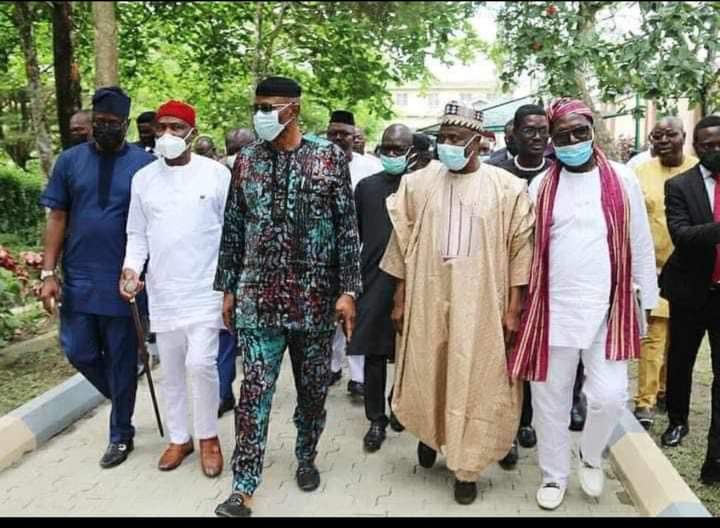 Former governor of Ondo State and immediate past deputy governor of the state, Dr. Olusegun Mimiko and Hon. Agboola Ajayi respectively on Monday stormed the Peoples Democratic Party (PDP) state Secretariat at Alagbaka, Akure, the state capital, as they held meeting with leaders of the party.
The duo arrived the party’s secreatriat around 2:20pm.
They were accompanied by Hon. Joseph Akinlaja, a former member of House of Representatives.
The leadership of the party led by Fatai Adams had assembled at the party’s secreatriat and held closed-door meeting on how to receive the former members of the party back to the party.
Hon. Kemisola Adesanya, who is aspiring for the vacant House of Representatives seat in Akure South and Akure North Federal Constituency, was also present at the party secreatriat to attend the meeting.
Although neither Mimiko nor Ajayi spoke to newsmen who were on ground to seek the party’s chairman’s reaction to allegations levelled against him by one of the members of the party, Dr. Olusegun Philips Alonge.
Three PDP governors, Aminu Tambuwal, Seyi Makinde and Nyesom Wike, had a forthright ago visited Mimiko at his residence in Ondo city, wooing him to return to the party.
The national leader of Zenith Labour Party(ZLP) had told newsmen after the closed-door meeting with the three governors that he would consult with his followers and hold stakeholders meeting before making his decision.
The immediate past deputy governor of the state and gubernatorial candidate of ZLP in the October 10, 2020 governorship election in the state was present at Mimiko’s residence when the PDP governors visited.
Ajayi had returned to PDP from All Progressives Congress ((APC) shortly before the party’s governorship primary but lost to Eyitayo Jegede.
He was immediately defected to Mimiko-led ZLP and was automatically handed the party’s governorship ticket.
Nevertheless, it could not be ascertained if the deliberation in the meeting would include making decision on when to receive the duo back to the party officially.