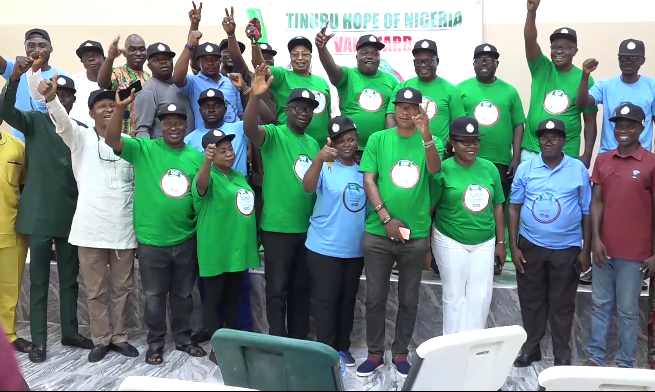 A group, Tinubu Hope of  Nigeria Vanguard is mobilising Nigerians and people of Ondo state to support  National Leader of All Progressives Congress (APC), Asiwaju Bola Ahmed Tinubu to be elected as the successor of President Muhammadu Buhari.

At a news conference held at the  at NBA Hall, Alagbaka, Akure,  the state capital, group said  that Tinubu has the wherewithal to turn around the nation’s current socio-economic and political challenges.

The leader of the group  which is made up of successful professionals cutting across different fields,  Bode Famose noted that the former governor of Lagos State has the courage and competence to manage the country’s resources to return it to a productive economy.

He dismissed the claims that the prominent presidential aspirant on the platform of APC was sick, saying enemies of progress are behind  the campaign of calumny.

Famose queried that if Tinubu were sick as being portrayed by his critics, how was he able to observe the Umra in Mecca, South Arabia.

The group emphasised that Tinubu’s pedigree, particularly how he turned Lagos State’s socio-economic sectors round, was enough to convince any sound minds that he’s capable of rescuing the nation’s economy from the precipice.

Chief(Mrs.) Florence Lawani, the woman leader among the group, explained that the group would take the campaign to the grassroots and speak with market women so that Tinubu would be elected president in the general elections in 2023.

She said: “We are joining other teams to ensure Tinubu is elected President of Nigeria.

“I represent the grassroots, market women, I’ll tell everyone in the market, religious gathering that the person who can turn the nation round is Tinubu.

Senator Tony Adeniyi(SAN), who was at the event, disclosed that some northerners began the campaign for Tinubu, adding that it prompted them to start South West Agenda For Asiwaju (SWAGA).

He said Tinubu has what it takes to reposition the nation and turn the life of the citizenry around.